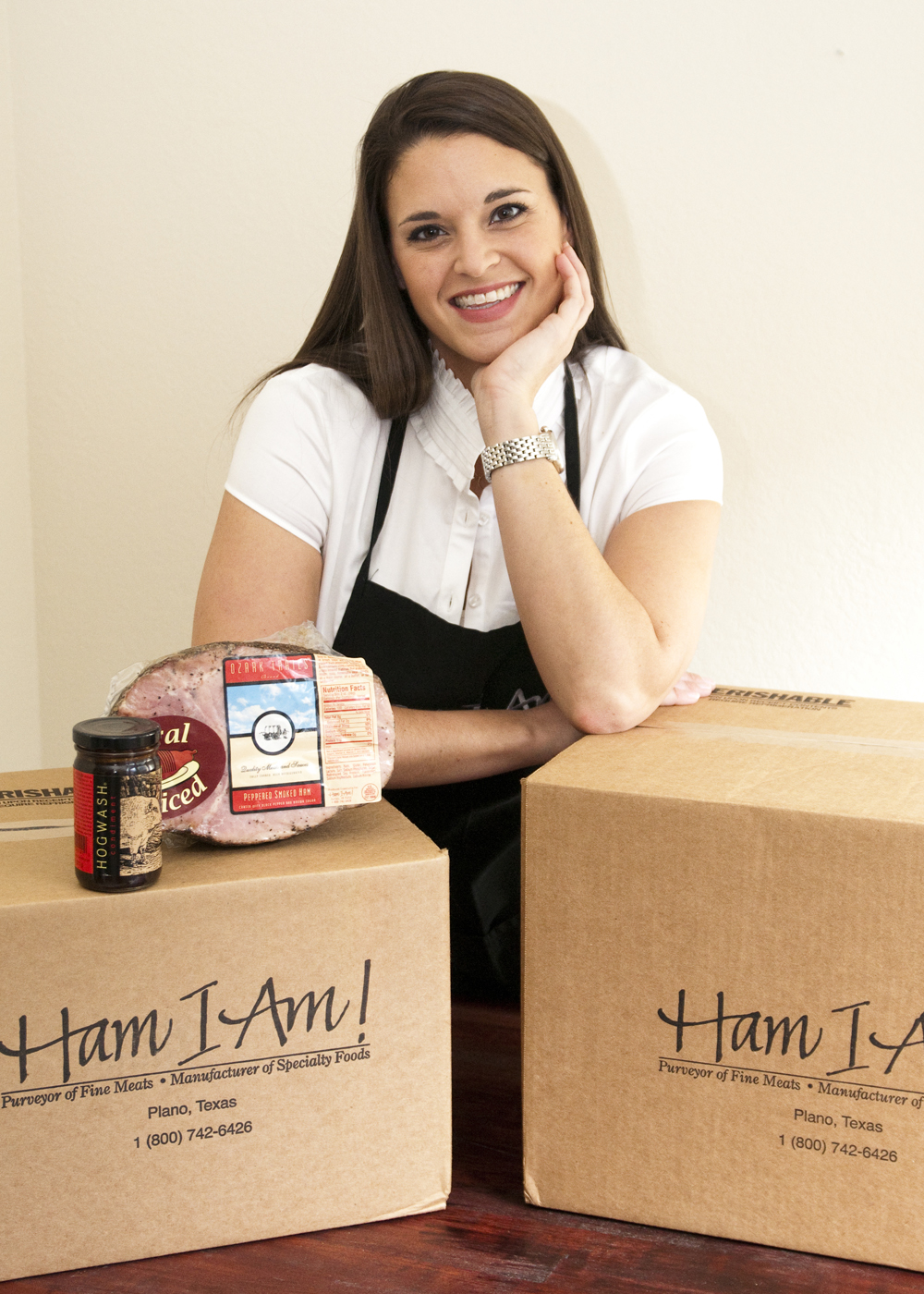 Sharon Meehan conceived Ham I Am! in 1986 out of a love and a passion for good food and a commitment to sell only the very best. In 2004, daughter Meghan Meehan joined the ranks and now oversees daily operations. Not much has changed in the past 26 years; we still strive to share the very best with you and your families.

Our smoked hams and bacon can be found on the shelves of specialty food stores and on the tables of discerning palates across the country. Our customers have become our friends, and once they order, we keep hearing from them year after year. We happily become part of their family traditions, and we would be honored to become a part of yours too!

(The Following is an authorized reprint of an article first published in 1998 in the Dallas Morning News. All businesses evolve over the years. Ham I Am! still sells to wholesale accounts in addition to our mail order business. Please order directly from our website)

Sharon Meehan is spending this weekend in the eye of a hurricane, using the temporary lull to prepare for the next gust of gale-force winds. In the next seven working days, the 43 year-old president of Ham I Am! will FedEx at least 100,000 pounds of ham and turkeys from her tiny operation in Richardson.

Talk about your make-it-or-break-it holiday rush: Her 12 days of Christmas, which began last week, will account for 60 percent of Ms. Meehan's 1997 million-dollar-plus revenue. "You know the hurricane is going to hit. You just don't know how strong the winds are going to be," she says, having weathered the onslaught for the past 11 seasons. "If you aren't prepared, you blow it."

The first year she carted a couple hundred hams here from Arkansas in the family's white Volkswagen Rabbit, hawked them door-to-door and at church bazaars and school fundraisers as a way to put toys under the tree for her four small kids. This year, hams, turkeys, and assorted gourmet meats arrive by the container load. The succulents are quickly processed, boxed and transferred to awaiting Federal Express trucks for overnight delivery around the country. Ham I Am! will ship 20 tons of ham and 40 tons of turkey for holiday feasts – not to mention the herbed-rubbed Colorado lamb chops or the semi-boneless marinated quail.

Folks who order through the Neiman Marcus Christmas Book will get theirs in "Neimanized" packaging and might not even realize it came from her. Like her Honey Baked competitor, Ms. Meehan's ham costs about $5 a pound – significantly more than the buck or two a pound you'll pay for the water-added variety in grocery stores. "You're paying for water at the cash register," she sniffs. "When you cook it, it will be like a poached ham." Most of the meat will be accompanied by a jar or two of Hogwash, the secret sauce she conjured in her kitchen to spice up parties. She'll sell about 100,000 jars of the tangy-sweet-with-a-tinge-of-horseradish concoction this year. "I wanted Hogwash to be the ketchup of the '90's because it's so versatile and goes on anything," she says. "Now it's going to be gravy of the millenium."

In addition to Neiman's, her products are sold by Harry and David, Marshall Fields, Stanley Korshak and Henri Bendel. New York City is her hottest market, followed by Chicago and San Francisco. The road to hog heaven has had it's potholes, but she has never been one to let life hamstring her. The single mom of four has been [involved in lawsuits with several large companies over the name of the company and of the signature sauce, Hogwash]. She successfully fended off both. In the case of the contested company moniker, she proved it was the result of a quick encounter with Dallas chef Dean Fearing. Ms. Meehan went to the back door of The Mansion on Turtle Creek to deliver him a porkulent sample. "He said, 'Oh, you're the ham lady,' And I said, 'Yeah, ham I am!'"